Fortune favours the bold; the ones who dared to try; the ones who didn’t worry sounding stupid and asked questions that seemed silly. They tread on and on until they figured it out.

We hear the first line all the time and probably grasped what it might mean. Rarely, however, do we act upon it and give ourselves all sorts of reasons for why we didn't try to be bold in our actions. Those aren't reasons. They are excuses and I could even come up with a table I call The Excuses 101 Table.

These are examples of excuses I might give myself. I write the refutations that I have found to work in overcoming those excuses. Excuses basically are reasons we give ourselves to avoid our fears, succumbing to them and a life of mediocrity. I'm not going to do that.

I will admit that I'm scared of many things as I embark on my journey to achieve my decade goals for 2020-2030. But the greater danger is regretting not having done something and I don't intend to fall into that trap.

For more than a week, I have put off annoucing that I'm going to build my latest side project, Young Makers in public. Initially, I found enough courage to write a post annoucing my reasons for building in public. I aptly titled the post "I will stop building things in the dark" which was badly criticized by a friend for being a waste of my reader's time because my points were everywhere. It made me really upset and worse of all, discouraged.

Fear of being a bad writer

The fear was very real and gripped me by my neck, with sharp claws – I might recall having bled. Though not physically, my mind bled with blood that stunk of fear. If I was out in the wild, a predator would have smelled fear and devoured me for sure.

But no, this isn't the same wilderness our primitive ancestors faced since ancient times. We are now in the modern, maker's wildernesss. Our predators are not physical creatures, but rather, that of the mind. Our lives are not physical either; they are whether we succeed or fail.

I was really scared people would care that I was a bad writer and ridicule me. Maybe they will, because this post is going to be public when I announce it on Twitter. But that's okay because I'll consciously sift out constructive criticism that will help me grow. As they say, steel is forged in the strongest of fire and there could be no better way than to write publicly so I could learn from the best. I'll learn faster that way, I'm sure.

Fear of being inconsistent

Now that I have announced I'm going to build my side project in public, I'm afraid of failing to be consistent. I'm afraid that when it happens, people are going to unfollow me and think of me as “he's just another talker”.

However, as I've proved with my The Excuses 101 Table, it's just an excuse to give up and let me fear overwhelm me. And no, that's not going to happen today. My refutation for this excuse is simple. By building in public, I'm going to use my fear of being inconsistent as a form of negative visualization. Instead of letting it cripple me, I'll let that fear drive me to build up my willpower muscles.

Willpower is a muscle that I will have to build by fighting reasons to quit whenever they come up. Sure, I might be tired but I'll still ship at least 1 feature. I might be uninspired but I'll still put in stupid ideas because even it's 1 millimeter closer to the perfect idea, I'll take that over zero progress. 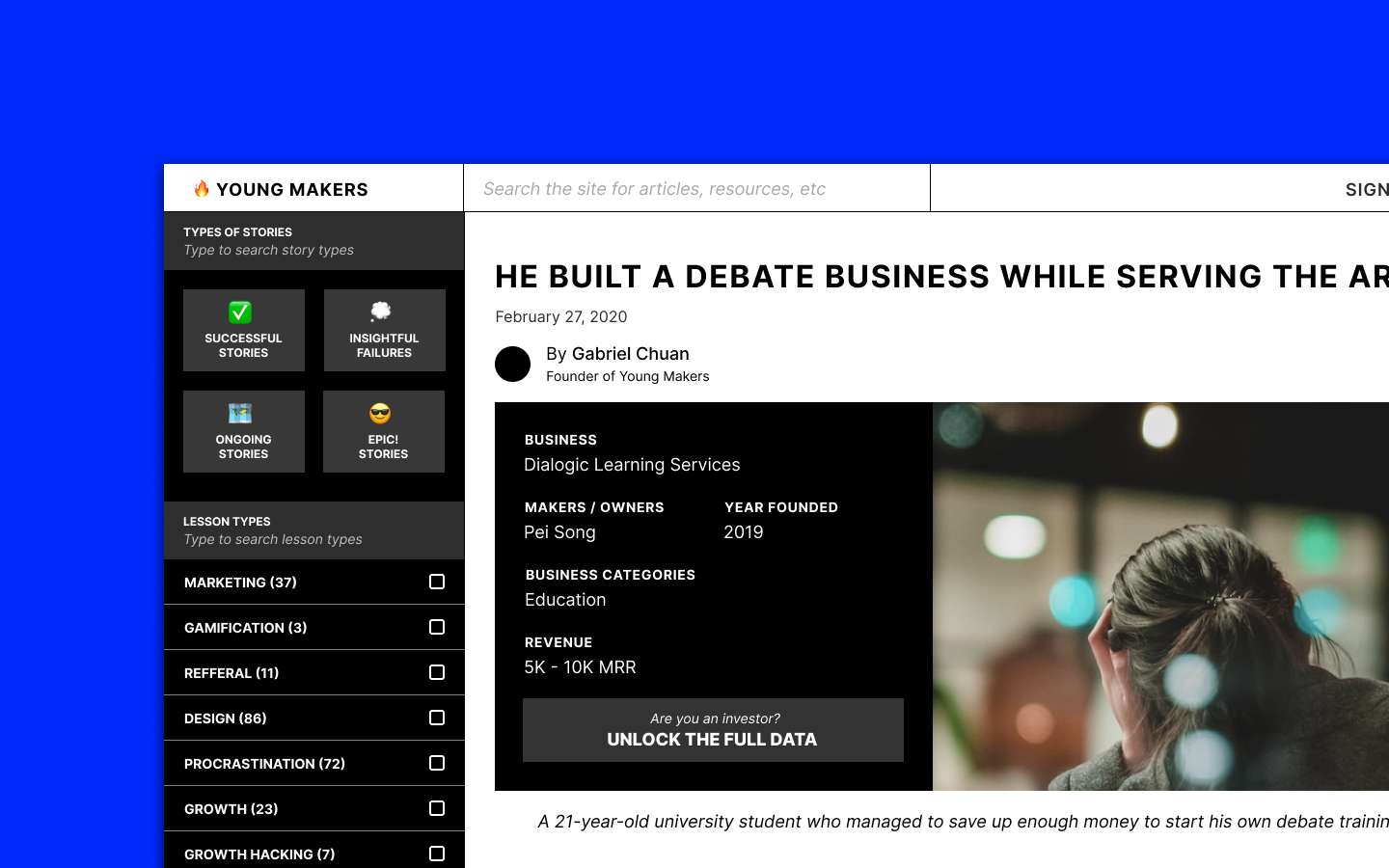 I'm building Young Makers to be a community platform where young makers are exposed to actionable stories on building profitable products.

They can connect with each other, build in public and document their learning process in a way that's easily accessible by other Young Makers.

Mentors can connect with young makers and guide them, that they may learn faster and better. Masterclasses could even be conducted via the platform.

It's the place where every young maker would want to be in.

Join me in my journey by following me on twitter.com/gabrielchuan.

I'll be transparent about almost everything.

From decision making to first revenue.

From mistakes to what works.