We've had around 728 cases, which is almost triple from what we had a few days ago. It was mildly shocking because the numbers rose so quickly. But we knew what others in the world were reporting, that this probably meant we were nearing the peak of the curve and it'll start slumping downwards soon. 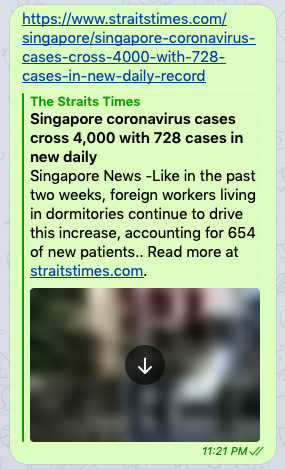 Admist all the hysteria and conversations that occasionally fill with COVID banter, my Internet went down. Of all places, you wouldn't expect Singapore to encounter anything like that. But no, the telco my family subscribes to, Starhub, fucked it up and I had no Internet access for 2 days and 1 night. They said they fixed things but they also broke a lot of things in the process of fixing it.

Of all times, this had to happen. I slept early last night and woke early, expecting to have a productive day but no. They announced later in the day that they would provide 6 days of free broadband / WiFi access. But that's not what I was expecting.

Most folks in the current lockdown have to work from home (WFH) and many would require a stable internet connection, possibly with more bandwidth than usual for Teleconferencing / zoom calls. When home connectivity is down, the next thing we'd think of is to use our mobile data. And that's what we did, but this takes up a lot of mobile bandwidth and it can be expensive. Yet, we had no choice as this was the only way to get Internet access to keep working. I'd imagine people without mobile data bandwidth (or the capacity to pay for extra) would suffer from this outage.

But the telco, Starhub did not even bother to think in the shoes of customers like that, in these trying times. At least give all affected users free unlimited mobile data for the duration of the outage so we could continue working from home. They're definitely not that great at customer support.

Nonetheless, I'm still grateful that our telco is more stable as compared to that of other countries that have less than ideal infrastructure like ours.

Fingers cross they don't fuck this up tomorrow or any of the coming days. We all need the Internet to work.