Absolutely Stuff’d - web bloat in the age of climate change

I’m a bit old school when it comes to web design. If a page takes more than a few seconds to load or has elements that are JS bloat which hinders my reading experience, I usually don’t bother and close the window/tab.

People often talk about the effects of having large webpages for those browsing on slow networks, where every bit of data is precious. However, a further consequence of this is the amount of carbon emitted for that page to be rendered/loaded.

For those who don’t know, the Internet as we know it is made up of servers. Servers are computers where things like websites and apps are hosted, and this is delivered to you, the viewer, via the Internet. Just like any piece of technology, a server uses electricity to keep it powered, with its usage spiking in times of heavy load.

We as webmasters can reduce the load on servers by doing things like optimising webpages to be lighter, using JS elements only when necessary, and so on. If we do this, not only will websites and apps perform faster but the server hosting the resources will be using less electricity too!

Most web servers use electricity that is from renewable sources, and this translates into reduced or neutral carbon emissions. We can calculate how many grams of carbon is emitted from websites per page load using tools such as Website Carbon Calculator.

I tried this tool out against two websites. One is my site (https://tom.org.nz), which I recently redesigned to be a lot lighter and faster to load. I tested it against one of the most popular websites in Aotearoa New Zealand, Stuff NZ (https://stuff.co.nz), an online-only news site. 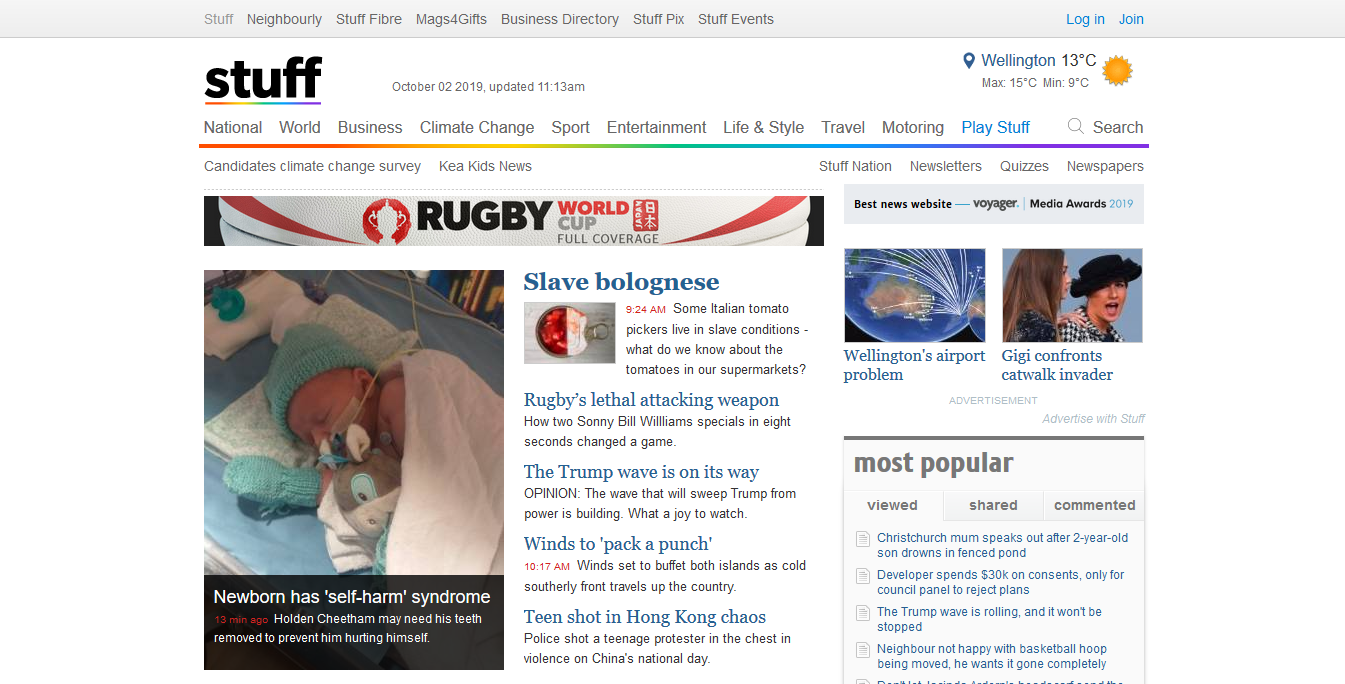 On the surface, the Stuff website looks pretty minimal in design. For reference, I am using an up-to-date Windows 10 Pro machine, browsing on a fibre optic network connection. I disabled uBlock on my Firefox just to see how it looked, and I was pleasantly surprised to see that there weren't any ads or popups!

I enabled uBlock again, and was told that it was blocking 14 trackers on the homepage: 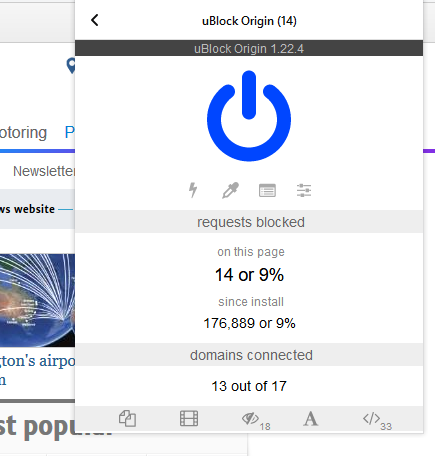 14 elements blocked according to uBlock

I was curious to see what it would be like to use another browser like Microsoft Edge which has no built-in ad-blocking or tracking protection like Firefox. I wanted to know if Firefox was doing anything to prevent ads from loading on Stuff, and sure enough... 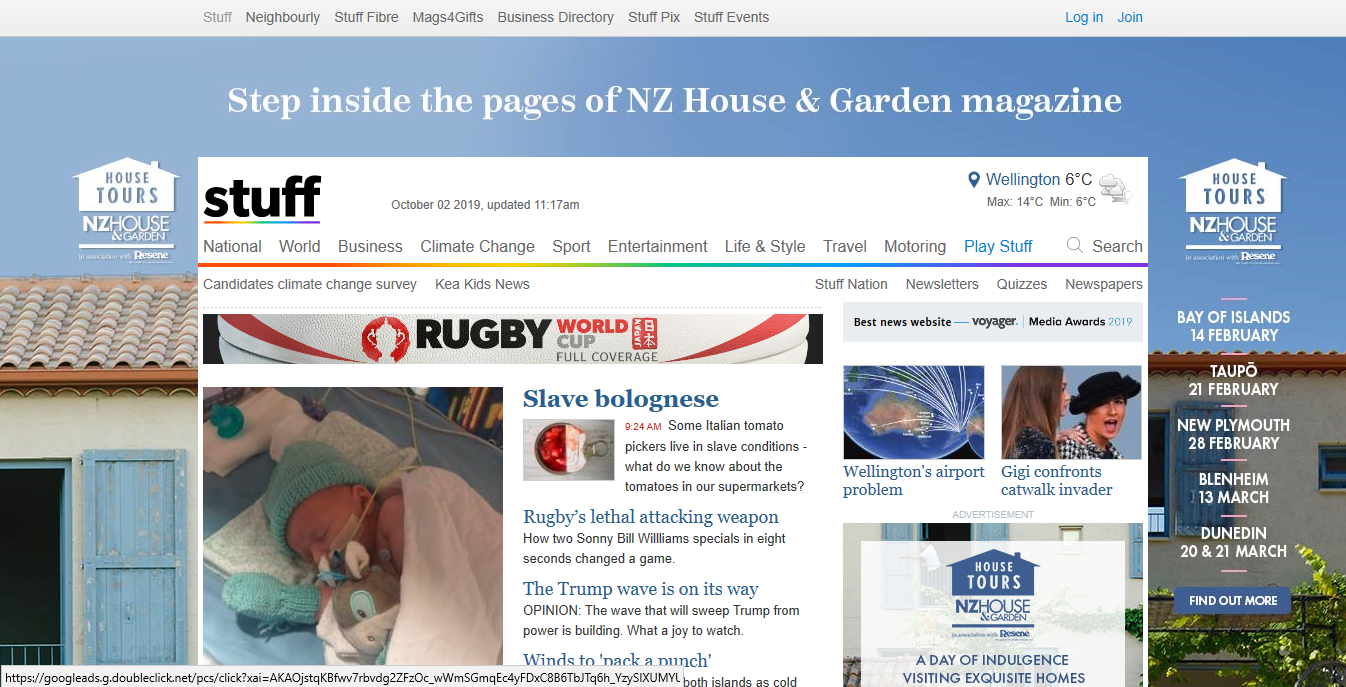 The plain white background was in fact a full-page ad!

I clicked on a random article, and found it to be absolutely littered with ads. 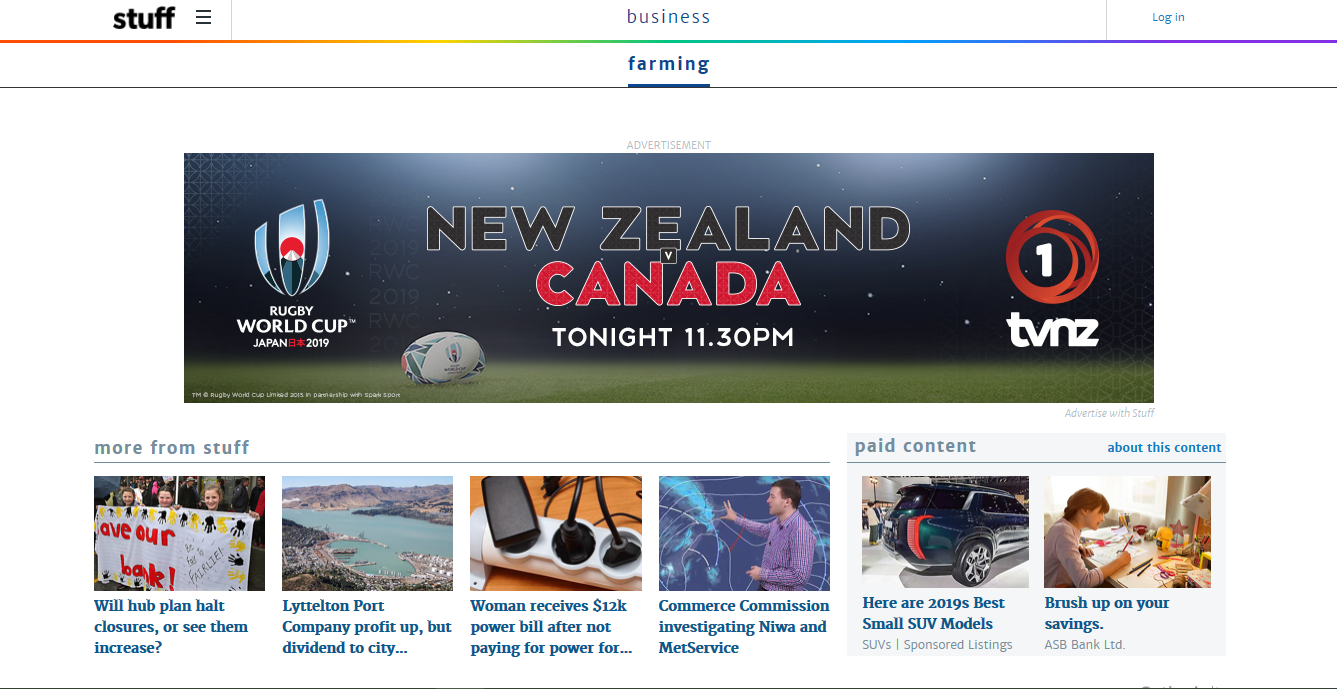 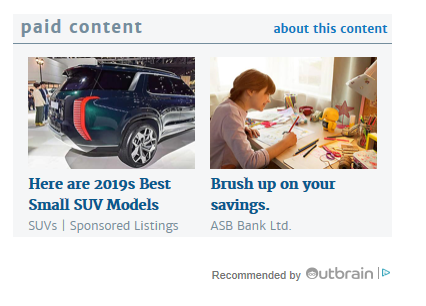 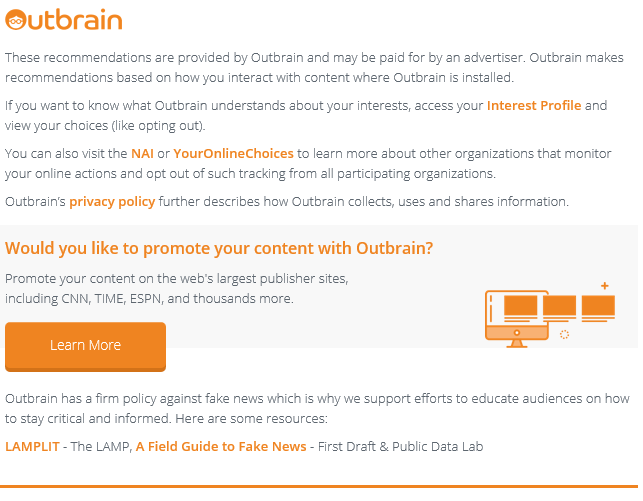 This ad network Outbrain avoids use of the word "advertisement", and instead refers to it as "content." The Privacy Policy isn't much better either, all of your browsing is being harvested through this ad network.

Given the otherwise minimal design of Stuff (at least on the surface), I used Website Carbon Calculator to test how bloated Stuff was. I was able to obtain how many monthly page views Stuff generates across all of their properties thanks to their September 2018 media kit [mirror] (their listed figure is 123,482,000 views per month, but this is probably higher now).

Lo and behold, this is probably the most bloated and environmentally unfriendly website in all of Aotearoa: 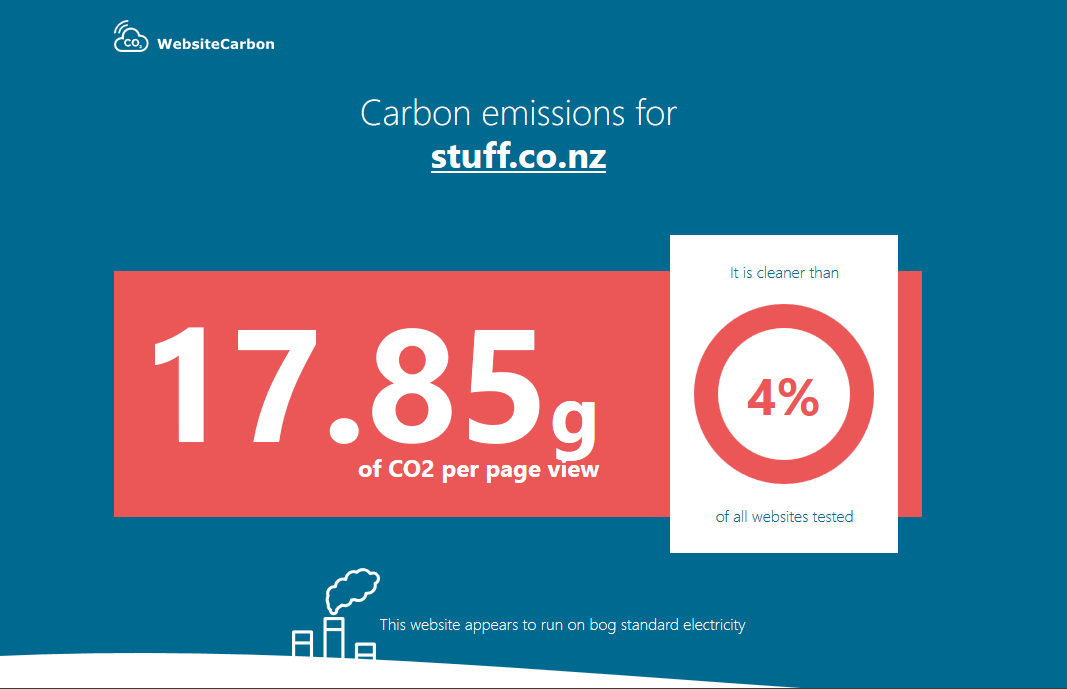 If this result is even slightly correct, it means that the page views for Stuff generates close to 26,454,044kg of CO2 every year. That's 26,454 tonnes of carbon being released into the atmosphere annually, as the website appears to be running on non-renewable energy sources.

As a comparison, here is the result of my website (which is admittedly less sophisticated than Stuff), and also that of the New Zealand Herald (website of the national newspaper, which apparently was reaching 1.84 million page views a month in 2018)[mirror]: 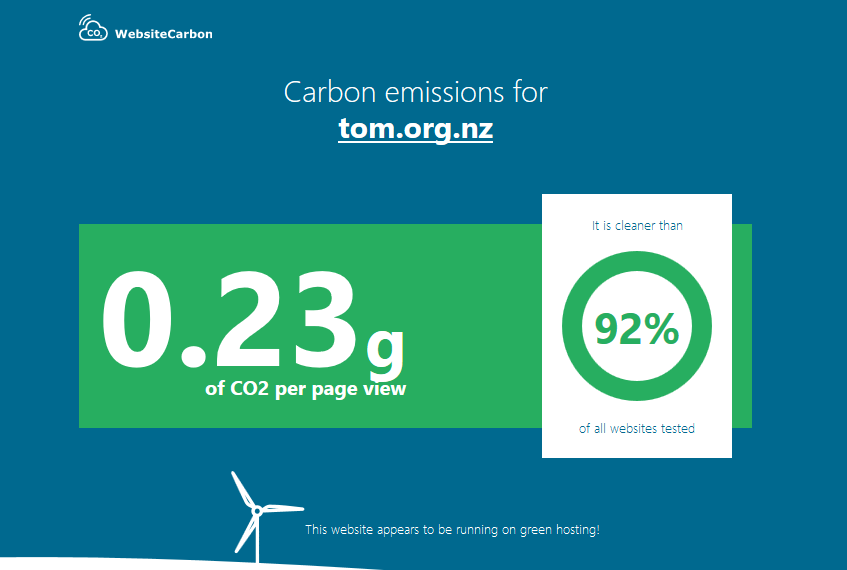 A lean site by comparison! 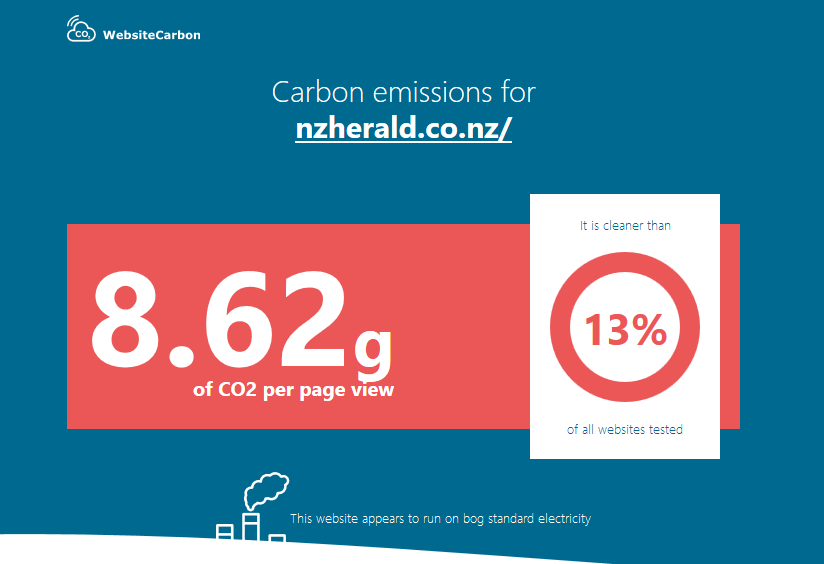 Bloated, but much lighter than Stuff

NZH and Stuff are comparable in terms of what they are doing as news outlets. However, this is unacceptable web design and horrid from an environmental standpoint - no website, no matter how “sophisticated” and “modern” should be this bloated. I haven't even measured the amount of bandwidth it takes to load either of these sites uncached, but there's no doubt that it would be unoptimised for mobile users on 3G or 4G networks.

I urge both companies to reconsider and optimise their sites. This is a terrible look for any company, let alone one based in Aotearoa New Zealand which prides itself on having a “clean, green” image.