A week ago the NYTimes released their documentary on our deep fake detection and creation research. This means we can now share results from our audio synthesis work as well.

(Edit note: a previous version of this piece called the game an "audio Turing test. As Scott Niekum points out, classifying this as a pure Turing test is likely a stretch. Whereas Turing Tests require dialogue between the interrogator and other side, the game we created simply represents listening to audio recordings and guessing if they are real or fake––an important distinction)

This project was done out of curiosity so the rigour may not be perfect, but I hope what I outline below gives an early glimpse at how we may deal with the trust of synthetic audio in the future.

So, what did we see in the results?

1) Accuracy for the initial question was 55%. This shows that initial listeners had close to random (50%) probability of choosing accurately. This is significant because it highlights the possibility where if listeners hear audio outside of our test context in the real world, they’ll likely have trouble discerning real from fake.

Optimism: Accuracy can be learned, but plateaus

2) In aggregate listeners correctly guessed ~68.2% of the time, with accuracy increasing from 55% on the first question answered, to 72.6% on the 8th question. In relation to how listeners learn how to discern fakes after answering a few questions, most of the improvement in accuracy was seen in the first 4 questions, with accuracy learning becoming flatter from question 4-8. 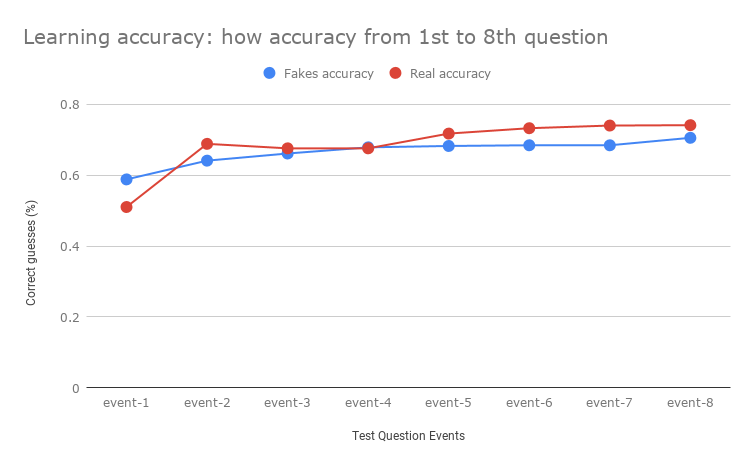 From 1st question to the 8th, listeners accuracy increases 17.6%

The proximity of these averages may also show how good the current technology is at creating synthetic voices. 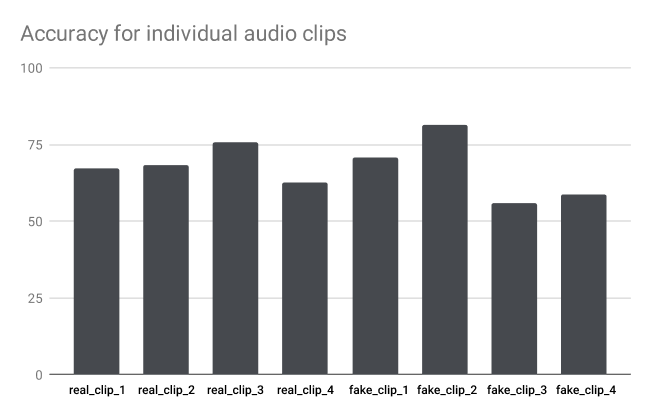