I've been tapping more into my comedian identity lately, and even venturing outside the comfortable ambiguity of the improv stage. Instead, I wanted to expand my toolkit with sketch comedy, which has a heavier emphasis on scene storyboarding and smart humour injected through dialogue. If I manage to keep up this enthusiasm, I also think it would be a super interesting experiment to aim for the SNL staff writer role one day. A true creative aspiration!

What inspires me the most to explore comedy more as an art form is how it combines multiple sources of media together — written language, stage performance, video production — to convey unique points of view. All the while, you're free to explore complex concepts and thoughtful themes about any aspect of life, in a lighthearted playful manner. Such a narrative structure is freeing and raw. That might be the ultimate goal: to be a multimedia comedian.

The following sketch is a 3-hour brainchild, where I challenged myself to craft a parody in the style of SNL's Weekend Update. The format takes the traditional news broadcast and presents skits & jokes based on topical current events. Here's the result of combining my fascination with the technology world and a nod to the iconic Wizard of Oz. Presenting “The Wicked Witch of the Web”: 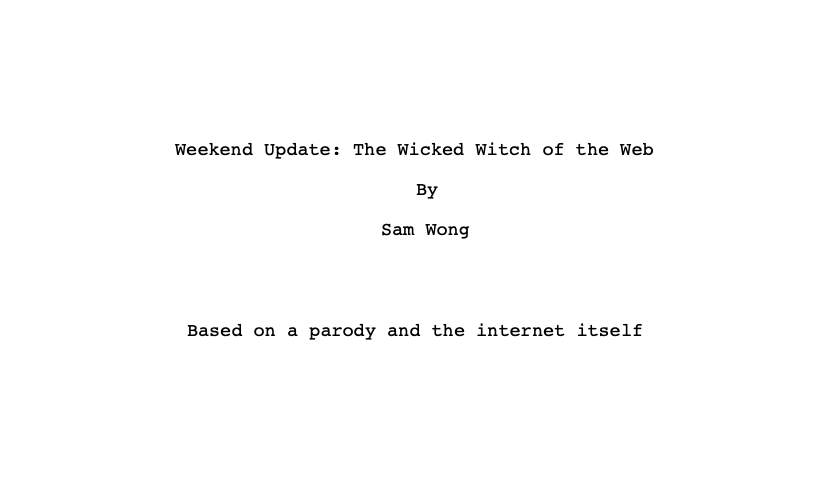 I'll be peppering in brief commentary throughout this script about my creative choices and moments of inspiration as drawn from my own life experiences. The premise of using the web as a window into the world gave me lots of flexibility and variables to play with, especially with my goal of creating a more mischievous tone. The first beat serves to build the backdrop: Who is this witch? What does she really care about? How does she view the world and the web? 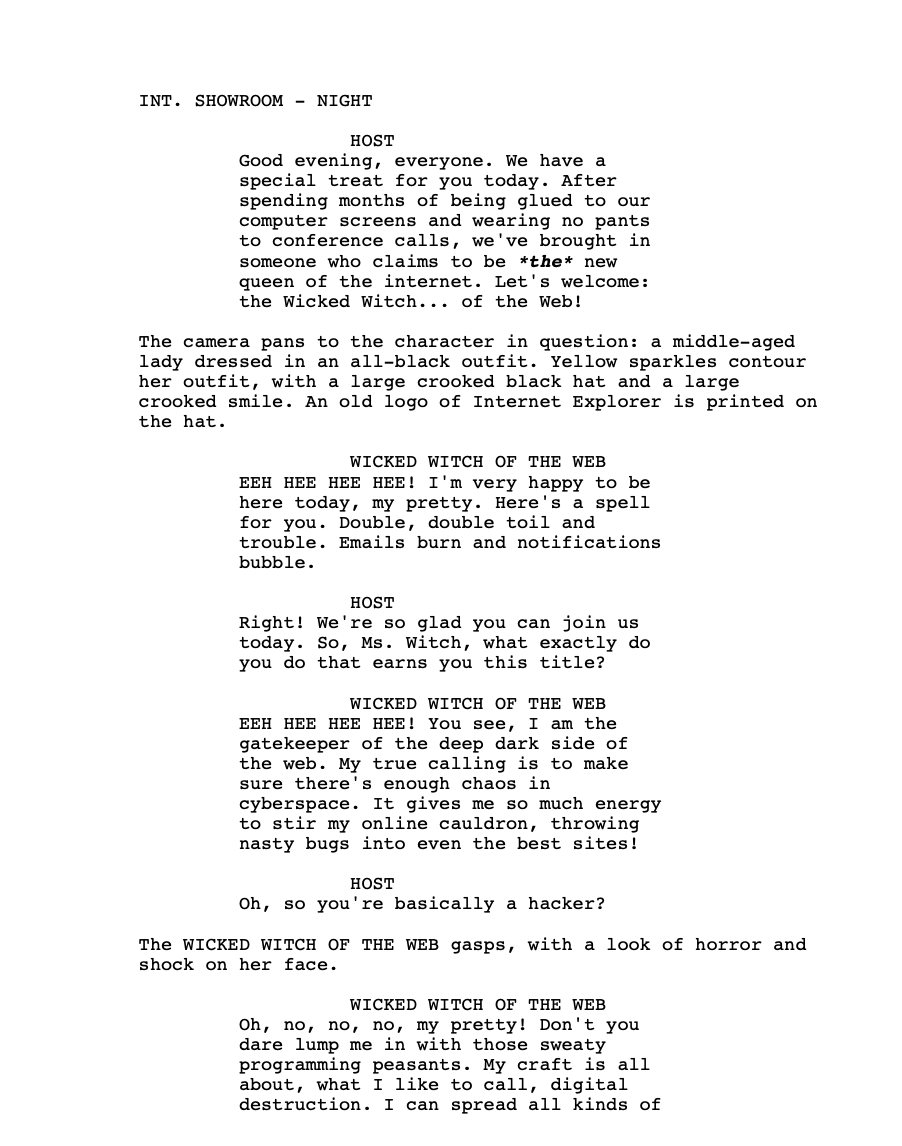 At the outset, I needed to make this witch character just as malevolent as her counterpart in Wizard of Oz. This meant pulling from the witch's motivations, speech patterns, and symbols — all in the context of this new digital universe. The line “Double, double, toil and trouble. Emails burn & notifications bubble” is actually taken from the witches in Macbeth, but I weighed giving her a lyrical, almost poetic voice as more important than staying strictly in the bounds of Oz. The audience learns about her devious goals and holier-than-thou attitude, as she dismisses vanilla white hat hackers as just “sweaty programming peasants”. 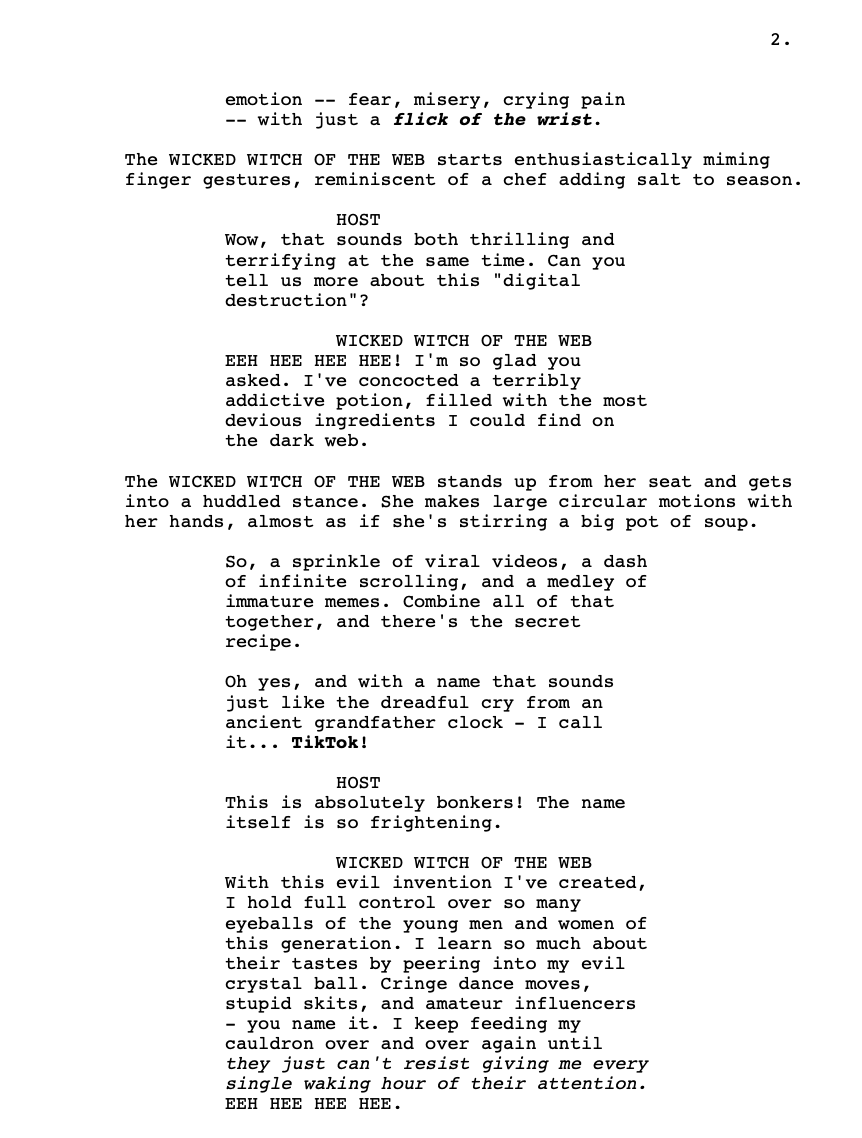 To replicate the SNL personality, I dedicated the second beat to incorporate more physical comedy into the scene. The classic stirring-of-the-cauldron motion harks back to a witch's core means of creation: magic potions. This also accentuates the witch's crazed craving of causing turmoil on the web. The entity of “Big Tech” often gets a lot of flak for designing addictive experiences that capture attention for monetization — this monolithic power now resides in the hands of a wicked sorcerer who casually controls levers of virality and toxicity. 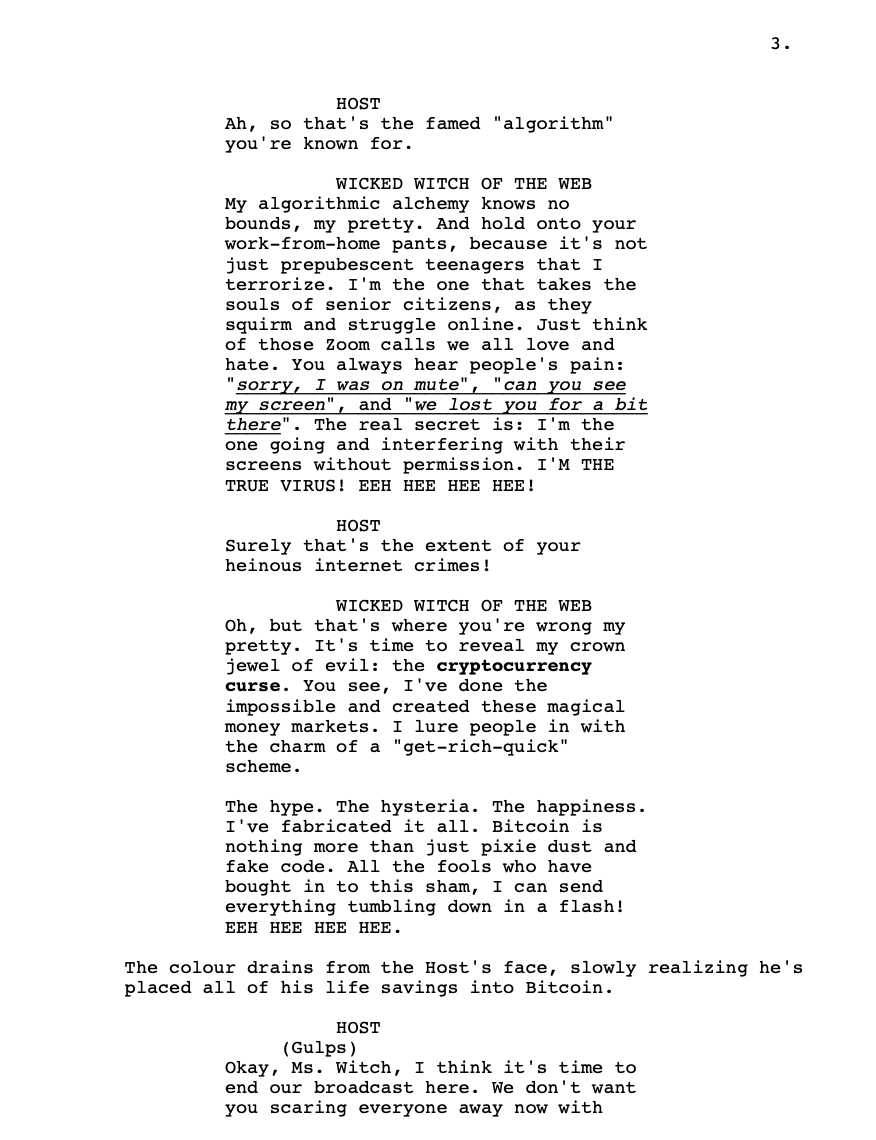 This third beat is where the sketch escalates further by layering in a subtle societal sub-commentary on sensitive topics: cybersecurity and cryptocurrency. While we're desensitized to algorithm-centric products like TikTok and Twitter, masking as essential tools through their ubiquity and utility, we become more conscious of things that explicitly affect our quality of life. Everything from technical bugs that limit our communication to the charm of magic money that is mysteriously programmable, capitalizing on our interest and ignorance. Importantly, this sketch organizes around the idea of pinning a single source of blame — the Wicked Witch of the Web — to all the problems of being plugged in. Imagine a world where we could re-direct all our frustrations to a single named body and re-allocate our focus to dismantle these broken systems in place. 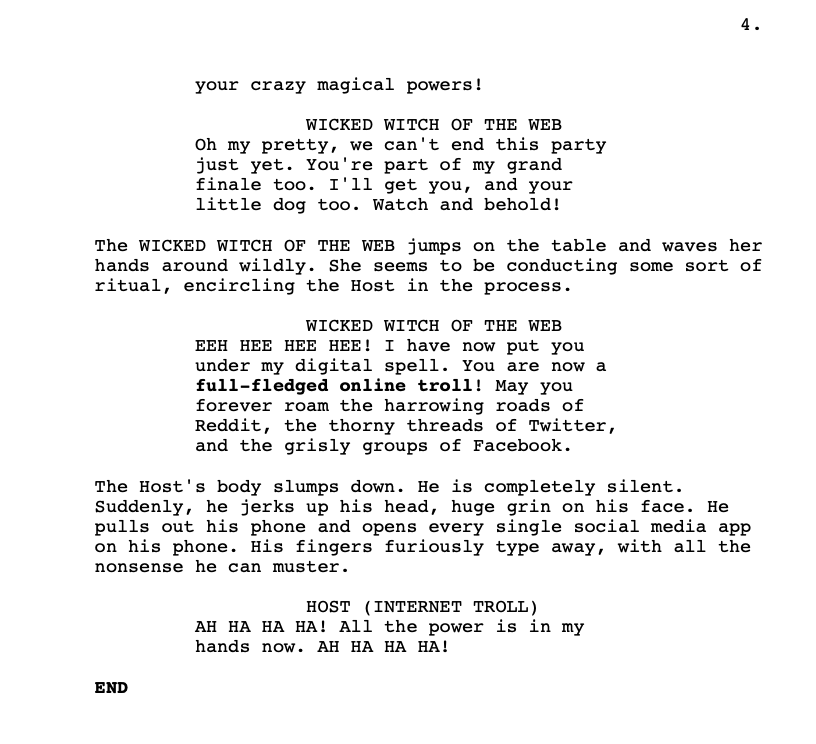 This Weekend Update ending sets up a twist — just when you think the witch is done with her technological tirade, she shows her final hand and transforms the host into an internet troll. When I first thought of this idea, I almost laughed my way out of this framing. Way too silly, not enough substance, right? Well, then I remembered what all my improv & sketch teachers had drilled into my mind: be absurd only if you can be specific and believable. Since the callback is derived from the witch's supposed spell-based strengths, the joke doesn't betray her ethos. Rather, it adds depth! It also gives me the liberty to take jabs at the not-so-pleasant parts of internet sub-forum culture on open platforms like Reddit.

There were also many other technical concepts I could have sprinkled into the monologue: antique web relics (paywalls, targeted ads, malware), tech themes with witchcraft wordplay (Apple & poison apples, Facebook & spellbooks), extensions of the witch's universe (dark web, blockchains). But writing sketch comedy requires difficult trade-offs, and there's no way of telling how audiences will react to jokes until the moment they're executed. As long as I stay true to the characters and the environment, there are “no wrong choices”, only different paths of dialogue that hopefully lead to a funny outcome!

And to me, personal authenticity is the most beautiful part of the comedic creative process :)